Ten years ago this August, I began a short documentary film project in Toronto, Canada, which I finished the following spring. With my camera, I followed people I’d only just met, down streets and around corners. They were scanning, listening, watching. And many times helping or rescuing. All the while, I filmed them and talked with them. Later I added scanning, listening, watching, helping or rescuing to my filming activities, too. The people were only half of the story. The real story was the birds we were watching for and that we’d inevitably find and either bag because they were dead or help because thankfully they were alive, even if injured. These people, volunteers, would spend hours of their time doing this twice a year for several weeks. Why? Because the birds would be flying through the city during their migration. And, it’s about to start again. 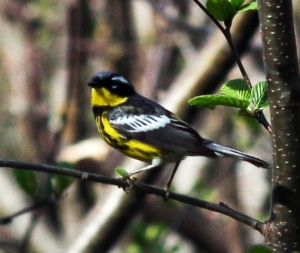 Birds like this Magnolia Warbler I photographed a few weeks ago, will soon start their southern migration from my home and theirs in the boreal forest of Canada. This bird traveled here possibly from southeastern Mexico, or maybe Panama. Possibly its home is in the Caribbean. I must point out it survived the trip to come up to my neck of the woods last spring. Now I wonder if it and also its young will make it safely back to its southern home. You see, among the birds I filmed were injured and dead magnolia warblers. They had struck building windows. Others are still striking buildings today.

When I screened an early version of my the film about this topic of bird window collisions, my advisors said “too many dead birds, Deanna.” You see, I had included all of the dead birds I’d filmed in the 3 short weeks when I followed the volunteers around town, as well as when I went out on my own. I wanted to honour the birds by including them. When it came to do that edit and cut out all those “too many dead birds” I couldn’t bring myself to edit the original version. Instead, I had to save a copy of it and edit the copy. The original, with all the birds, remains on my hard drive.

A little bit of good news 10 years later is that the volunteers of the Toronto, Canada organization FLAP, or Fatal Light Awareness Program, who had teamed up with a pioneer of the movement, Dr. Daniel Klem, Jr., have been joined by many new volunteers and organizations across North America. It is good to know that more people have realized the seriousness of problem and are working to help the birds. Across the continent, people in cities such as Chicago, New York, Ottawa, and Vancouver are stepping up to help birds and gather data.

Now, there are also ways to make existing windows visible to birds that weren’t around before. Visual markers like dots or vertical lines can be used. You can buy them or make them yourself. UV Stickers are another alternative. Other recommendations for constructing bird-friendly buildings have followed the release of Toronto’s Bird-Friendly Development Guidelines which FLAP assisted with. Both Audubon and the American Bird Conservancy have created guidelines as well as cities like San Francisco and Calgary.

But how serious is the problem that we need to consider altering our windows? Dr. Klem, from his decades of research, has concluded that between 1 and 10 birds are likely to die from striking building windows. To clarify this, he means 1-10 birds per building per year. At the low end this is in the hundreds of millions of birds each year in North America who will be injured and likely die. It is after all, hard to get back into the air when you’re laying on the ground stunned from a crash, and there is a lurking cat or other scavenger nearby. Outright injury, such as a brain injury, also spells death to a little bird. At the upper end of the estimate, which is suspected to be much more accurate, it’s projected that over a billion birds die every year in North America because of our windows.

Imprint made by a bird colliding with this window in Thunder Bay, Canada.

A great many of the birds that will strike windows will be like the warbler above that I followed around the forest and finally captured in a photo. They are migrants flying through the unfamiliar terrain of cities and towns. But, even birds that don’t migrate are vulnerable such as whomever hit so hard they left this imprint on an upper window of a building here in Thunder Bay. From the size of the imprint, I’m suspecting a gull or maybe a pigeon. This one hit very hard and may not have survived the collision. The powder that remains on the window came from the feathers due to the force of the hit.

Is there anything you can do to help? Yes! And we need as many people as possible to jump on board with this. Windows are invisible to birds. We must either cut the reflection of the natural world that a window creates, or we must put up visual cues that the birds can see. Until windows with these features built-in are standard on buildings – both homes and businesses, city and country – those of us who love birds must take steps to add them to windows ourselves. You can also add your voice by being another person advocating for changes to building construction to make them bird-friendly from the start. Even everyday conversations with neighbors helps raise awareness.

To learn more about this, and meet members of FLAP and Dr. Daniel Klem, Jr, please watch my short documentary “What’s All the “FLAP” About?!” It may be 10 years old but sadly, it is still completely relevant today. You can also visit flap.org for more information.

And for the sake of the birds, please share this with others so we can make buildings safer so we put a stop to injuries.

Please place any comments, questions or observations you have in the comments section. If you know any groups who would like to have me present this in person along with the updates, I am very happy to do this. Please contact me to arrange details.

I saw this bird hit a window but I could not save it. The building was just across from a woodlot where many birds were foraging during fall migration. I found a lot of dead birds at this building. Toronto, Canada